Why Prince’s “Rally 4 Peace” Was So Awesome

Prince has no idea how personally meaningful it is that he did a song about Baltimore at his “Rally 4 Peace”. I’ve been a big Prince fan since I was old enough to steal my mother’s Greatest Hits CD.

When I was in undergrad I paid over $100 to see him live during his Musicology tour. I went by myself because I could get a better seat than if I bought two tickets together. I was young for the concert, but I knew all the words to all the songs and I’m a theatre kid so dancing and singing along by myself didn’t feel like that big of a deal.

It’s funny because I also am a big fan of going to the movies alone. I tend to want to “check-in” with whomever I’m with at the movies, turning to glance at every funny or scary part as if to say “are we having similar experiences of this?!” When you go to the movies alone, it’s just you in a dark room and the movie. It’s better than watching it at home in many ways, chiefly that you will be shamed should you take out your phone for a little second screen action.

Though I went with a group, the vibe was similar at this weekend’s Rally 4 Peace as I was the biggest Prince fan among us.

I heard some gossip: apparently, Beyonce and Alicia Keys had wanted to do some sort of women’s empowerment aspect to the show, but they couldn’t get it together in time. Beyonce, like Prince, is a known perfectionist so I understood but was still disappointed that I wasn’t going to see The Prince Show w/ Beyonce come to life.

I walked in the VIP entrance (I got connections, y’all) behind Marilyn Mosby and her family. Prince himself had given her tickets to sit on stage, mere inches from Beyonce, who I saw walk backstage with little Blue, and I can confirm the toddler is adorable IRL. Bey wore a high ponytail.

Mosby was the only city official to receive any kind of shoutout from the artist, something I could tell was not lost on the smalltown-mindedness of Baltimore. Prince also arranged for the families of Freddie Grey, Eric Garner and Mike Brown to sit on stage as well. The Mayor SRB and Congressman Elijah Cummings were there seated together, but not near the stage.

Prince, as he often does, opened the Rally 4 Peace with “Let’s Go Crazy” which thrilled me because I really love the apocalyptic feel of that song. He followed with “Take Me With U” and “Raspberry Beret” before launching into the song he wrote for the occasion “Baltimore.”

At one point, Prince brought the people who bought the $22 tickets down to right in front of the stage. He said he was there to serve Baltimore.

Prince finished out his first leg with big flourishing versions of “U Got The Look,” “Controversy,” “1999,” and “Little Red Corvette.” When I saw Prince in 2003, he performed “Corvette” acoustic. That’s not really important, I’m just bragging. Then “Nothing Compares 2 U.” (Prince loved text-speak way, way before texting.)

In typical Prince fashion he pretends the show is over and has the band leave the stage, but this wasn’t my first time at the rodeo, I knew the show isn’t over until AFTER “Purple Rain.” Prince returned to the stage for “When Doves Cry,” a little bit of “Sign of the Times” and “Nasty Girl” before “I Would Die 4 U.” Then he brought out special guests. Miguel joined him for a cover of “When Will We Be Paid” by the Staple Sisters, then launched into “Kiss” with Doug E. Fresh performing a verse in the midst. Again he leaves the stage, but I knew to stay in my seat.

He performed “The Beautiful Ones” which he doesn’t always do. Then it was “Purple Rain” time, which usually is the last song he does as it is 8+ minutes long on the album, performed with Estelle.

This is when Prince declared “The system is broken.” and encouraged young people to take more ownership of their city. He said he wants to stay in a hotel owned by one of us, which means that now all of my time is devoted to how I can own the hotel Prince stays at.

The band leaves the stage again, but Prince comes back out to a “No curfew!” chant and really blows my mind by doing a cover of “Don’t Stop Til You Get Enough!”

He capped off the show with “Alphabet St.,” “Mountains” and finished with a cover of “The Dance Electric” and we were finally allowed to bring out our phones!

The show ended with the crowd rhythmically chanting “Baltimore!” and it was god-damn beautiful.

Activists in the Aisles

As we walked out I noticed a lot of activists among the crowd, and my husband chatted with the amazing WeAreTheProtestors.org director DeRay McKesson while I annoyingly tried to butt in and make his acquaintance. At this point I was several drinks in and high on Prince, so I’m pretty sure I didn’t make the impression I wanted: 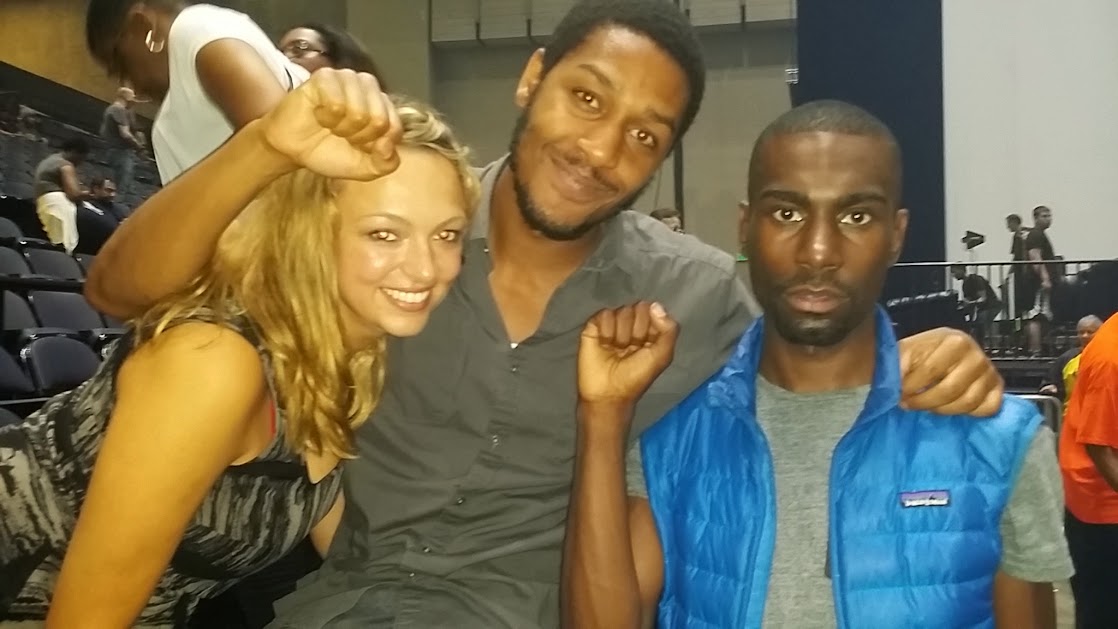 But I felt I had witnessed something singular and special, a true positive exercise in celebrity and community engagement.