Extreme fitness challenges: not much to brag about

The New Year is here and that means RESOLUTIONS! I see more than a few friends signing up for extreme fitness “races.”

These glorified dick measuring contests can be something to boast about. They are challenging. Good for you.

But, I hate these fucking things. Look at this picture ADVERTISING the race: 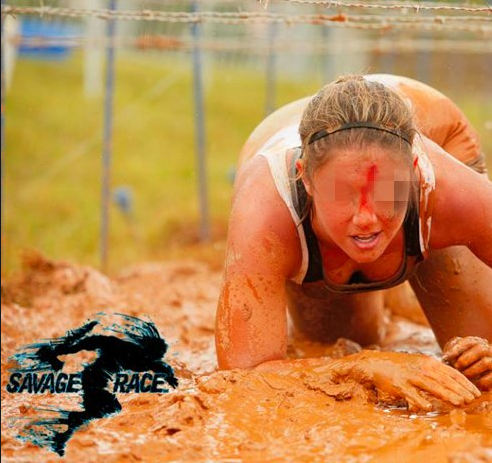 Yep, that bitch is bleeding from the head. Bleeding.

Though I’m sure this woman is all “ZOMG sooooo worth it!!!”, who cares? There’s something that rubs me all the wrong way about this sort of volunteer torture.

Do you want to DIE?

Tough Mudder, specifically, has electric fences at 10,000 volts. That you climb under with wet, muddy skin. Some estimate that upwards of 50% of participants walk away with a serious injury. What the fuck?

Were extreme fitness challenges invented for people who didn’t get beat or abused as children, but really wish they were? Obviously they feel like they missed out and must now inflict injuries on to themselves through taxing physical labor. It’s sort of like those rich people who go to hotels that resemble slums, you know, for funsies!

It disturbs me that Americans, though mostly fat layabouts from what I hear TV-talking-heads saying about childhood obesity and the like, are still overly impressed with physical feats. Brawn over brains much like our Roman forebears.

On the other hand, I support all sorts of ridiculous attempts at actual fun. I don’t begrudge the people who truly find this sort of grueling torture super fun. Have at it!

Just don’t brag about it and then put other people down for being “too lazy.” Frankly, this could extend to basically anyone who’s made a major physical lifestyle change but gotten self-righteous about it. There’s a lot of overlap here. Don’t become a fitness fundamentalist.

It’s the epitome of arrogance to presume to know why other people are the way they are. Human beings inherently have too many variables to make assumptions. Not to mention that our shitty food supply makes it hard for people of limited means to obtain quality nutrition in the first place. (Also if I may humbly request no one post those disingenuous “it’s cheaper to eat healthy!” charts. It is not when you take full reality into account. You cannot buy 10 cents worth of lettuce at a time. Thank you.)

I’m just not all that impressed by these races, so please stop acting like I should be. It’s gritting your teeth on a sunny day through a carefully contrived obstacle course. You’re doing that shit for fun, so stop beating your dick over it. No one’s life is being saved. Having the free time and resources to participate in this kind of bullshit is not in itself especially admirable.

So whether you’re a sad 20 something who misses their college’s Greek Week festivities, or someone looking for something to prove in their court-ordered sobriety boredom, just know that if you “compete” in an extreme fitness race it is utterly meaningless outside of the meaning you give it yourself. So the least you can do is be nice about it.